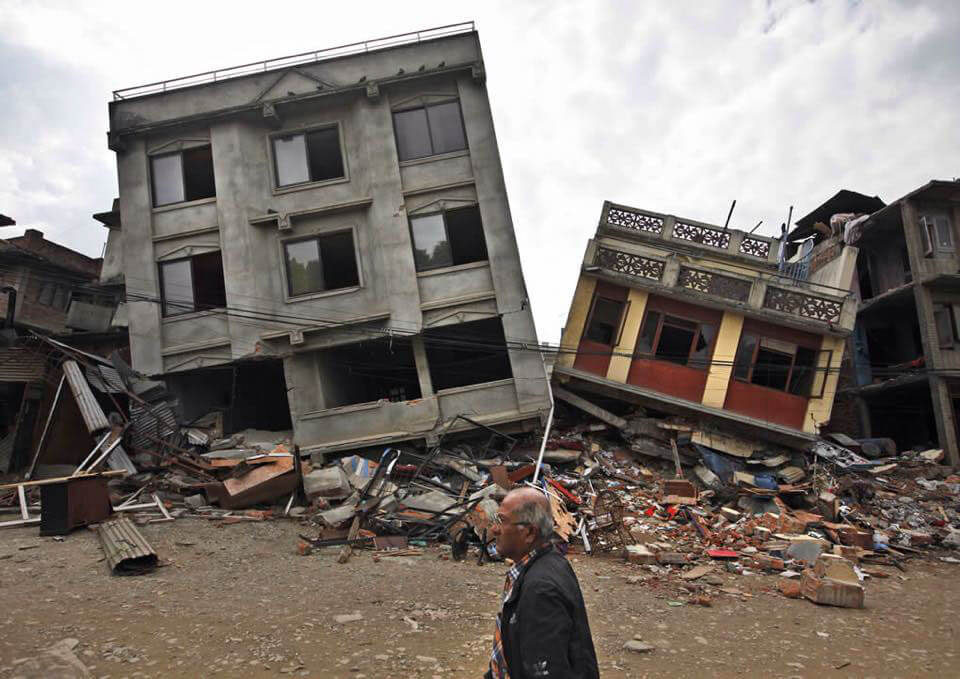 In 2015, Nepal was struck by a devastating earthquake. We knew there would be many without homes and food and water.

“We immediately called one of our partners, Nourish Nepal, a group of university students who had a truck and we outfitted the truck with as much supplies as they could carry. The next part was from one of the team leaders that headed off into the area that was damaged to bring help. We headed north out of Chitwan driving towards some remote villages. The driver said that the roads become increasingly treacherous and finally they could go no further and had to wait for the bad weather to pass.

The next day as soon as the road was open we arrived in Bhahcake Village which had suffered from a huge landslide covering many homes and we started handing out the basic items to the victims. Nobody was killed and they badly needed shelters so they could stay and save their crops. Five members of the team loaded up with as much as they could carry and went on hiking for nine hours.

The trip took longer than expected as the path was severely damaged at places from landslides. Finally, we reached the Kafal Dada village, which was a challenge finding the damaged village amidst the earthquake upheavals. It was almost dark so we stayed in one tent due to the heavy rainfall and we were afraid that a landslide might come and take us away.

We could well imagine what the people there were living with. The next day we distributed our materials to the villagers and looked at the damage. The villagers told us that no government or relief group had reached them and we were the first outsiders they had seen.

After that, we take some photos of the village where almost all the houses were destroyed though some houses looked ok from the outside but are so damaged inside and not livable. Though we did not see a huge loss of life all their homes are gone with the loss of their pets and domestic animals. Also, all their cooking utensils and clothes are buried in the houses which are too unsteady to go into to get them out.”

“I traveled to Nepal the next year to access the damage and we see what we could do to help. I was hosted by Punum Ghimire whose organization Yogdaan Foundation had worked with us in raising the money for earthquake relief and we visited two villages with severe damage. Kavre and the other was a leper village. Like in Kafal Dada I saw many houses still standing but liable to fall at any minute. Some were able to be repaired and many had to be knocked down so we could rebuild some of the homes in these villages. Global Action with the help of Nepal, Indian and American families in the Tampa Bay area raised almost $100,000 and used some of that money to build 280 temporary shelters.”

Shree Ganesh Secondary School and The Academy of the Lakes School

“I also visited a school that had lost many of its buildings. There was some help to rebuild the classrooms, but there was no money to rebuild the bathroom that had been split in half by the earthquake and was in danger of falling off the cliffside. We agreed to work with Yogdaan and Swiss gentlemen who lived nearby, Elmar Hagen to be part of the effort. Our Sister School program school, Academy of the Lakes in Land of Lakes in the Tampa Bay area volunteered to be our partner in the rebuilding of the Shree Ganesh school’s bathrooms.”